Far Less popular than the New Norton Summit Road, this climb is narrow and winding, and has far more cars. This is a climb to only attempt at quiet times, and even then it can be unpleasantly busy due to the narrow road. The Climb starts easily enough, and the first 2km or so are rather shallow. After that it gets gradually steeper, until the final kilometre which sits at an average above 10%. Start your stopwatch just after the turnoff to New Norton Summit Road (at the top of Magill Road), as you go past East St.

The first 2km of the climb are an average of about 3%, and for most of this section the road is fairly wide, with a broad shoulder. This would all be pretty nice, except that during weekdays there are cement trucks going up and down this part of the road. After you pass Hornsells Gully Road, life starts to get a little harder. The road noticeably narrows, and it also immediately gets a bit steeper. Thankfully, the cement trucks all turn off here, so at least you don’t have to deal with them. The next 1.5km average a tad over 6%, with a fair bit of undulation. Towards the 3.5km mark the gradient hits about 8% for about 200m, before leveling off for a quick breather before the final climb. You’ve got maybe 400m of relatively easy climbing back at around 4%, before the road rises to around 8% up to the switch-back, after which it’s an average of 10% to the top.

The next kilometre or so is all pretty nasty. The average gradient for the final part of the climb is 10%, but at a couple of points it hits about 13%. You’ll climb up the side of the hill, before turning right, where it gets a little bit easier. It’s tempting to cut the corner, but make sure there are no cars coming up behind you, there’s not really anywhere to hide! The climb finishes as you pass the Scenic Hotel 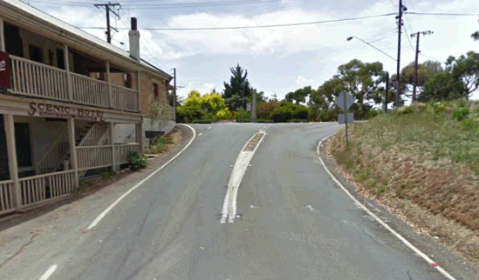 Turn left to go down Norton Summit Road, or right to continue through to Ashton and beyond. If you’re in need of a water bottle refill, there’s a convenient tap in the park near the statue on your right.